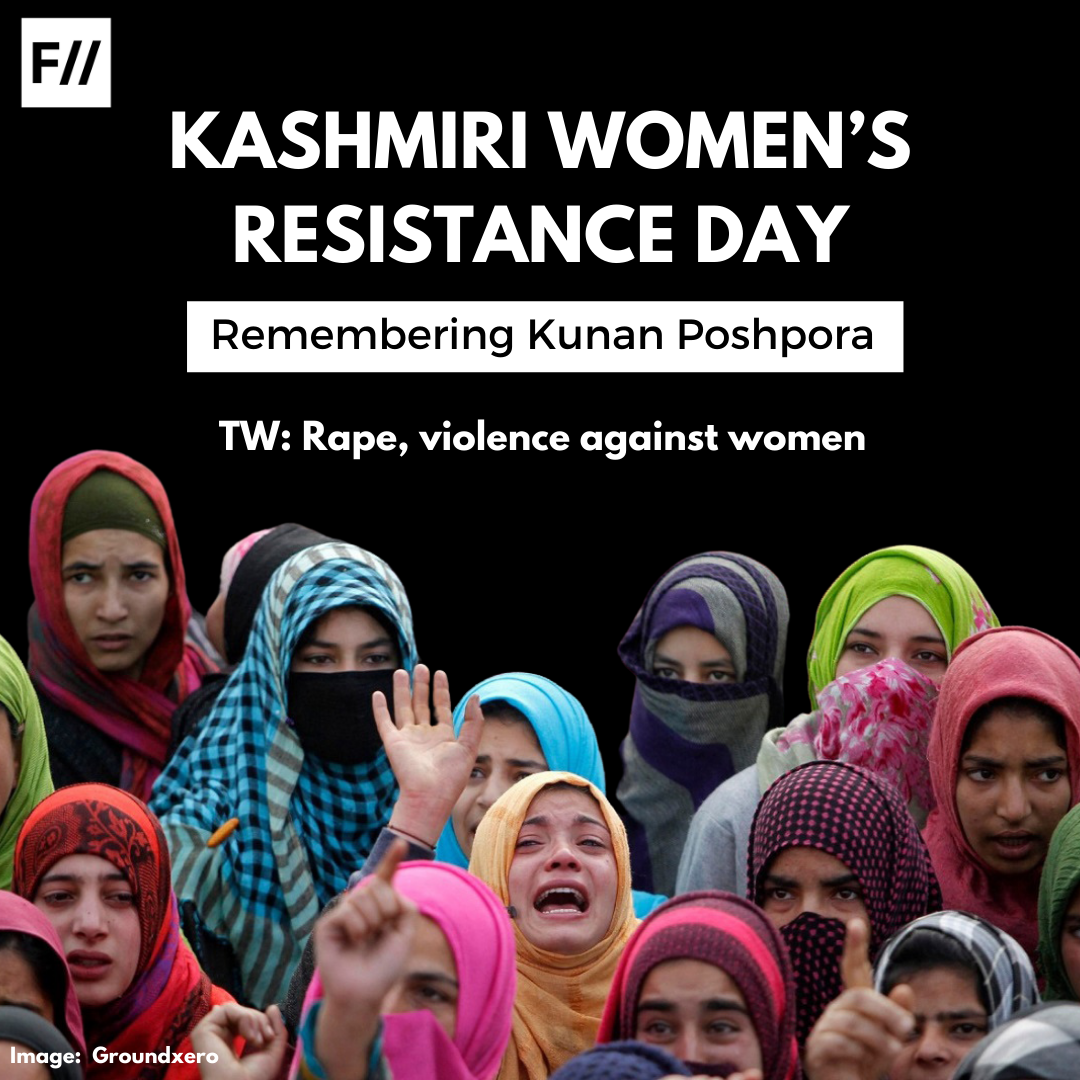 This Kashmiri Women’s Resistance Day, let’s make sure we do not forget about the unjust violence against women in Kunan Poshpora, a village in Kashmir, and lend our solidarity to those fighting for justice.

What is the Kashmiri Women’s Resistance Day?

Since 2014, 23rd February is observed as Kashmiri Women’s Resistance Day. It is to commemorate and salute the Kashmiri women who, in the face of tremendous agony and decades-long struggle, refused to give up. It is to send across the message that militarisation will not be taken lightly and that women will have the one thing that really matters – solidarity.

What happened in Kunan Poshpora?

On 23rd February, 1991, the seniormost rifle regiment of the Indian Army reportedly launched a search and interrogation operation in the village of Kunan Poshpora. Under the disguise of the search operation, the soldiers separated the men and women. While men were dragged out of their homes at gunpoint and taken to military camps, over the next few hours the soldiers raped at least 23 Kashmiri women in their own homes – the actual numbers still remain unclear.

How did authorities respond to this human rights violation?

Calling the allegations “baseless”, the Indian state rejected them and the accused were never prosecuted. The Press Council of India team concluded that “charges against the army were, “well-concocted bundle of fabricated lies” and “a massive hoax orchestrated by militant groups and their sympathizers in Kashmir”.

Is this an isolated incident?

The Support Group for Justice for Kunan Poshpora said in a statement, “The mass rape and sexual torture at Kunan Poshpora is only one unusually well-documented instance of the systematic, deliberate and pervasive targeting of women’s bodies as sites of extreme militaristic violence and reprisals against the Kashmiri insurgency. These acts of violence, which reached a peak in the early 1990s, have gone largely unreported.”

Militarisation as a tool of subjugation

Militarisation is another tool used for subjugation. When army personnel, on the night of intervening night of February 22-23, 1991, could not find anything they chose to show their power and their hate through rape. The UN itself has called violence against women as a war tactic.

How violence against women is a weapon in conflict

Planned sexual assaults on women by the state have been historically deployed as a weapon of war waged upon communities to marginalize them further and sap their will to resist domination. Rape against Kashmiri women, women from marginalised castes, the violence, rape against Thangjam Manorama under abuse of the Armed Forces Special Powers Act, are just a few examples of how women’s bodies are violated in war and conflict.

Is there hope for justice?

In October 2011, the State Human Rights Commission asked the government to reinvestigate the case of mass rape of Kashmiri women and compensate the victims. Since then, the Kunan Poshpora episode has been witnessing a brand new justice campaign presided over by Kashmir’s new generation.

“Keeping memory alive is itself a resistance,” a masked woman of Kunan Poshpora had told Free Press Kashmir on a summer day in 2013. “It’s the way to assert that we haven’t forgotten and surely, haven’t forgiven.”

Ever Heard About The Orgasm Gap?

What Are The Ways In Which Global Economic Policies Affect Local Gender Issues?

How Unemployment In Kashmir Is Affecting Marriage Prospects Of The Youth

“Working Women Will Be Tracked For ‘Their’ Safety”: When Will Women Have Agency In...

Gender fii-author - February 1, 2021 0
The public spaces are filled with men of all classes who loiter aimlessly. Women are reduced to mere visitors on these streets.

A Trip To Delhi: Women Reclaiming Freedom Of Movement & Space

Books guest - January 29, 2021 0
Rashid Jahan was severely critiqued for enunciating, in Behind the Veil and A Tour of Delhi, the plight of women bound to their homes and acting as pleasure-serving vehicles for their husbands.

Gender fii-author - January 29, 2021 0
Savarna women have appropriated the feminist movement leading to ignorance in understanding the intersections of caste, class and sexual orientation.